Press Releases and History, from the beginning, of the 3000GT Spyder's ups and downs.

ASC developed a 300ZX retractable hardtop for Nissan, which was shown at the 1991 Geneva Auto Salon, but they weren't interested in the design. However, their competitor, Mitsubishi, was and from 1995-1996 ASC built the limited production 3000GT Spyder at their Rancho Dominguez assembly plant.

Despite its preproduction appearance at the 1994 Chicago Auto Show, the Mitsubishi 3000GT Spyder - with a retractable hardtop - would not go on sale until 1995. The Spyder models were converted from 3000GT coupes by ASC Inc. 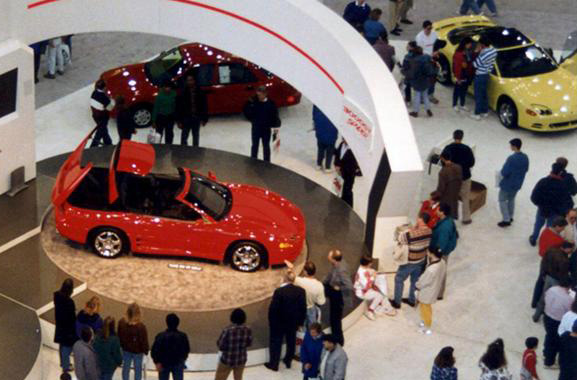 A rare overhead view of the Mitsubishi 3000GT Spyder on display during the 1994 Chicago Auto Show. The image captures the two-piece retractable hardtop roof in the stage of folding into the rear-hinged lid trunk storage room.

Automotive News | February 7, 1994
For many in the auto business, nothing stirs the emotions faster than sexy sports cars. Mitsubishi treated its dealers to a peak at an Eclipse convertible concept, the 1995 Eclipse and 1995 3000GT Spyder.

Automotive News | March 7, 1994
Mitsubishi has made a splash on the auto show circuit with its 3000GT Spyder, which will sticker between $57,000 and $62,000. Already, Mitsubishi has taken 500 orders [from Mitsubishi dealers] for a car that is five months from the showroom. Mitsubishi hopes to sell 1,000 Spyders a year.

Automotive News | September 26, 1994
The ballyhooed 3000GT Spyder, featuring the only retractable hardtop currently in production, will hit showrooms in January [1995]. Prices will start at $55,000 for the base engine and rise to $62,000 for the twin-turbocharged version.

Automotive News | October 3, 1994
For 1995, Mitsubishi's big news came this summer with the all-new Eclipse. This winter, the 3000GT Spyder arrives.

The 3000GT Spyder will be the only U.S. model with a retractable hardtop when the car hits showrooms in January [1995]. 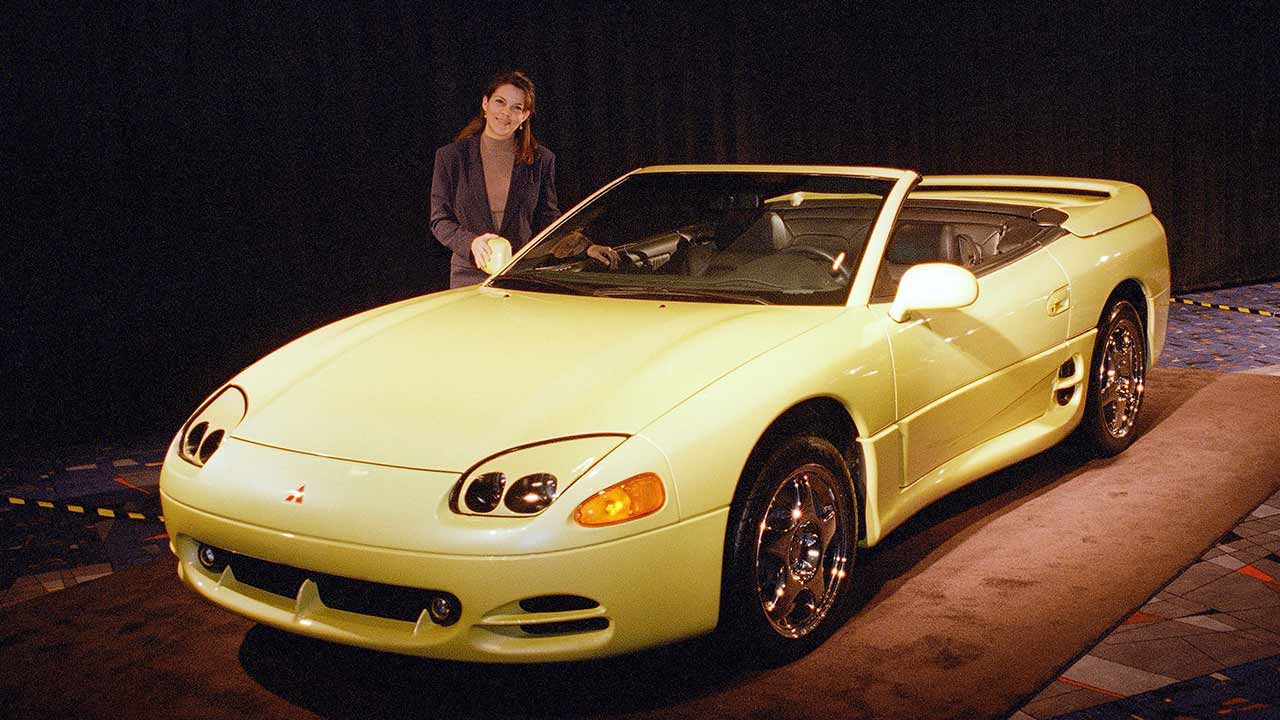 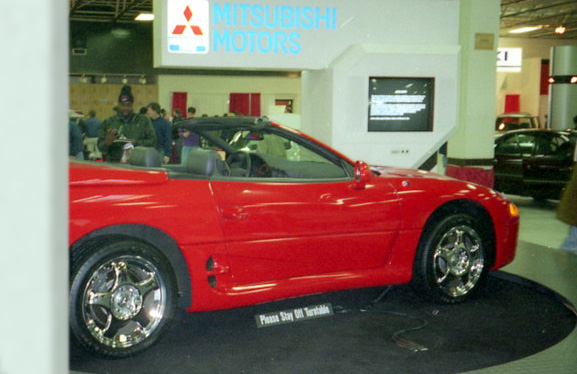 Mitsubishi announced prices for its new flagship: the 3000GT Spyder retractable hardtop. The roof retracts at the touch of a button.

Mitsubishi officials said 1,800 Spyders have been pre-sold [to Mitsubishi dealers], half the scheduled production run for the 1-1/2 years.

Mitsubishi is not rushing to change its 5-year-old entry in the skidding sports car segment. The all-new Spyder convertible is sold out for the next 18 months.

I have been associated with a Mitsubishi franchise for nine years as general manager and then owner.

The automobile market in the 1990s has been a real roller-coaster ride. It never ceases to amaze me that a manufacturer with as much money as Mitsubishi cannot put together long-term goals and set realistic objectives.

Mitsubishi's marketing strategies work on the flick of a switch - first a good program and no cars, then cars and no programs.

Mitsubishi recently introduced the 3000GT Spyder. It is expensive and has turned into a non-selling car. If dealers refuse to take their allocation of these $50,000-plus cars, Mitsubishi makes the dealer pay the manufacturer $2,500 for each car turned down. Not only can't we sell them, but they're making us pay them not to ship them.

Is this the sign of a factory that cares about its struggling dealers? Obviously, I don't think so.

In your Oct. 2 issue, Mitsubishi's Richard Recchia said he intends to stick his dealers with 700 of those cars by late October [1995]. 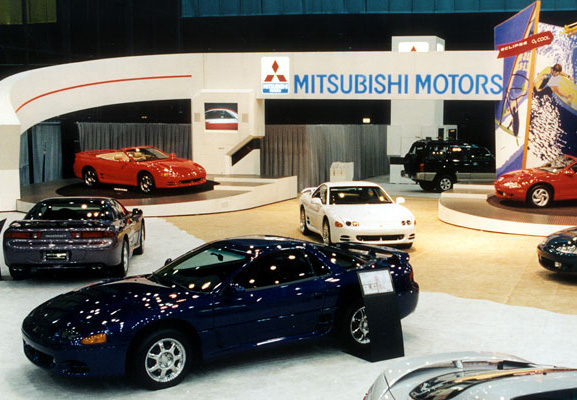 Various 3000GT models fill the colorful display in the Mitsubishi exhibit. In the background, left side is the 3000GT Spyder VR-4, featuring a computer-controlled retractable hardtop.

Although auto shows are primarily showcases for automakers, suppliers sometimes use them to unveil new products. ASC Inc.'s motorized convertible hardtop is a case in point. Four years ago, the company displayed a prototype hardtop on the Nissan 300ZX for the Geneva auto show.

It was a throwback of sorts to the 1950s, when motorized hardtops were popular. The car was a hit, but ASC wanted to be sure the market would accept it. The company decided to show a video of the car to two focus groups in California. The participants were likely buyers: business owners who earned more than $100,000 a year and had previously owned a convertible.

They ranged from 30 to 50 years old, and each had owned a Japanese or German luxury car.

The results were encouraging. Participants liked the power top's ability to draw a crowd when the owner raised or lowered it. Women appreciated the added security of a hardtop, since conventional soft tops can be slashed open by knife-wielding thieves.

But participants were concerned about safety. Would Junior get injured if he stuck his fingers over the windshield as the top was closing? Would the top be damaged if it lowered onto a forgotten package in the trunk? Could a motorist close the top manually in case of a power failure?

Their concerns seemed reasonable, so ASC added a manual system to shut the top, plus safety features to protect Junior's fingers and the packages in the trunk. The hardtop made its debut last July [1995], on the Mitsubishi 3000GT Spyder.

Mitsubishi is offering floor- planning assistance on the 1995 3000GT Spyder for February and March [1996]. The company is trying to ease the burden for dealers who have housed the flashy but slow-selling sports cars over the winter.

Kevin Ormes, group vice president of sales and marketing for Mitsubishi Motor Sales of America Inc., said the company made the move for a couple of reasons:

Unlike many luxury convertibles, the Spyder has no subsidized lease deals.

Convertibles don't sell well in cold weather anyway. The harsh East Coast winter has made a hard vehicle to sell an even harder sell.

'We told them we'd help them defer the cost until spring,' Ormes said. And the company is looking at other ways it can assist dealers after that.

The savings equal 9.25 percent of the dealer's invoice price divided by 12 to represent the monthly floorplan cost. The savings are credited to the dealer's parts account for February and March [1996].

Mitsubishi introduced the flashy sports car last June. Dealers sold 232 Spyders in 1995 and 56 in the first two months of 1996.

Ormes said 1996 Spyder production has begun; the company plans to start shipping them to dealers within about 60 days.

Scott MacDonnell, president of Oakdale Imports (Toyota-Mitsubishi) in Oakdale, N.Y., said he has yet to sell a Spyder. He has three in stock. He hopes the break on floor planning and the upcoming spring selling season will help.

'I've got to do something with them,' said MacDonnell, who retails about 700 new Mitsubishis annually.

Tom Croxton, general manager of Miller Mitsubishi in Van Nuys, Calif., on the other hand, said he has sold 10 Spyders and has one in stock.

'We're in an area where people are 'image conscious'; it is an emotional purchase,' said Croxton, whose dealership has sold more than 500 3000GTs since they came out in 1991.

Automotive News | April 24, 1996
Last year saw the arrival of the limited-production Spyder with a retractable hard top. It was designed at Mitsubishi's Design Studio in Cypress, Calif., and is transformed from a 3000GT to a Spyder by ASC Inc. in Long Beach, Calif.

The Spyder is an on-order car only, which means dealers will not have 1997 versions [1996 model-year] in inventory. The sticker of the 1997 Spyder is expected to increase by at least $3,000 as a result.

When John Sanderson, vice president of sales for Siemens Automotive Corp., plunked down $100 for a raffle ticket, he figured it was just a donation for a charity event, the Subway/Joe Dumars Celebrity Tennis Classic, founded by Detroit Pistons basketball star Joe Dumars. That changed when Sanderson won a $60,000 1996 Mitsubishi 3000GT Spyder donated by Mitsubishi Motor Sales of America Inc. Sanderson bought the ticket on behalf of Siemens, which reimbursed him. But rather than give the $100 back to Siemens, Sanderson gave the car back to Dumars' charity, which benefits Children's Hospital of Michigan/Detroit.